Kaohsiung Worth a Visit 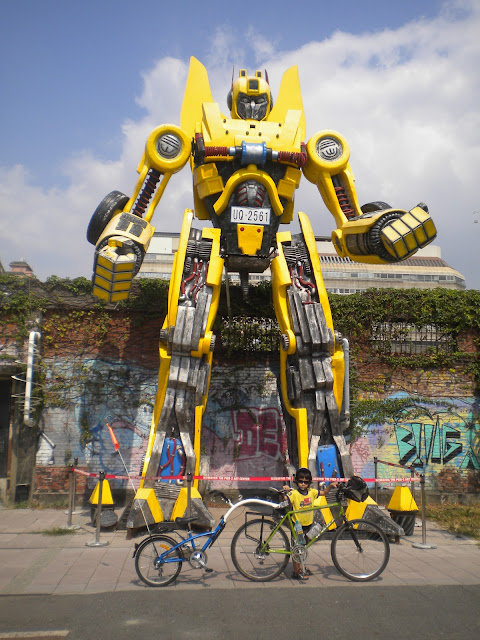 An article in the Taipei Times on Tuesday raised some questions about Kaohsiung as a tourist destination.

From that article:
one netizen wrote:“[If I had] to recommend a place to visit in southern Taiwan, it would be Tainan or Kenting, because those cities have more special characteristics than Kaohsiung.”

So, is Kaohsiung worth visiting?
Should a round-the-island bike trip just head inland at Tainan to Meinong and then south to Kenting and just skip KHH?

Kaohsiung certainly doesn't have the historical attractions of Tainan, or the natural beauty of Kenting, but it's for sure worth a visit, if you can spare a day or two.
Here's why:

1) Kaohsiung is a planned city, with wide streets that mostly follow a grid pattern. This makes KHH the easiest city in the country to navigate for a visitor. The 2 MRT lines that run North/South and East/West are easy to use. Plus, you can take any bike on the MRT, at any station, for as far as you want to go for only $60NT. No major city in Taiwan is as easy or safe to get around in by bicycle.

2) It has an excellent bike rental program that's very convenient and easy to use. Bikes can be returned at any of the many rental stations around the city.

3) As some people pointed out in the TT article: “I really like Kaohsiung, just because it is not so crowded, has a slower pace of life, while it does offer the convenience and prosperity of a big city.”
KHH is a relaxed city; nobody is in such a hurry that they can't stop and help out a visitor.

4) There are a lot of attractions within an hour of the city, so KHH makes a very good base if you want to explore all of Southern Taiwan: Tainan, Meinong, Fo Guang Shan Monastery, etc. Plus, Kenting is only 2 hours south by bus or taxi.

5) It's pretty cheap for such a big city, with nice hotel rooms for around $1,200NT and lots of places to eat or drink that aren't expensive. Also, there are several places with live music such as Mercury Bar, featuring local bands performing original songs.

6) The airport and high-speed train stations are really close to the city making coming and going very convenient.

7) The weather in KHH is great; not too humid in the summer and not too cold or rainy in the winter. The winters in fact, are really good for cycling with mostly clear skies and temperatures around 20-24 degrees. 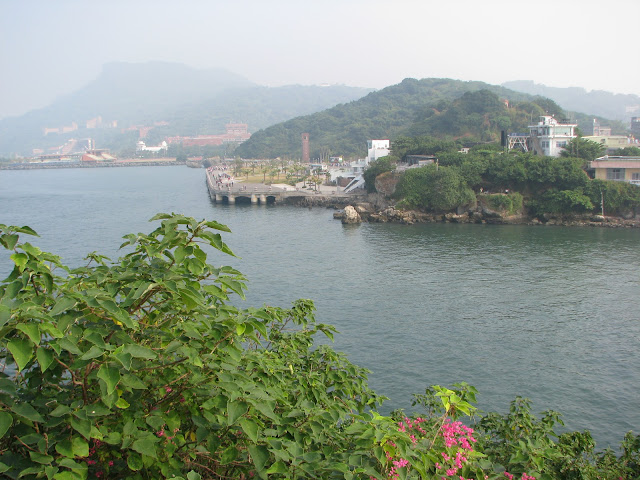 But, while Kaohsiung has lots going for it, there are also several things that make it unattractive. The biggest problem for most visitors is the lack of good information about the city in English. The tourist information center is next to impossible to find; located on the 12F of a building that isn't near anything. Most online information is pretty outdated and/or just wrong. So-called big draws for tourists like Liohe Night Market are terrible. As my Taiwanese friend put it: "That's just for Chinese tourists now!"

As the backpackers from Malaysia questioned:
What is happening to Kaohsiung? Why are there so few people on the streets?”

Well, everybody moved north to the Tsoying district over the past 10 years; including me. Yet, all the online information seems to be about the downtown. The downtown area is increasingly a ghost town, with more and more businesses closing. The Tsoying area on the other hand has plenty of new shops, restaurants and bars. The Reifong Night Market, just behind the new Kaohsiung Arena and Hanshin Dept. store, is the best one in the city and packed with people from Thursday to Sunday when it's open. There are great local and international restaurants and pubs here, but hardly any tourists. 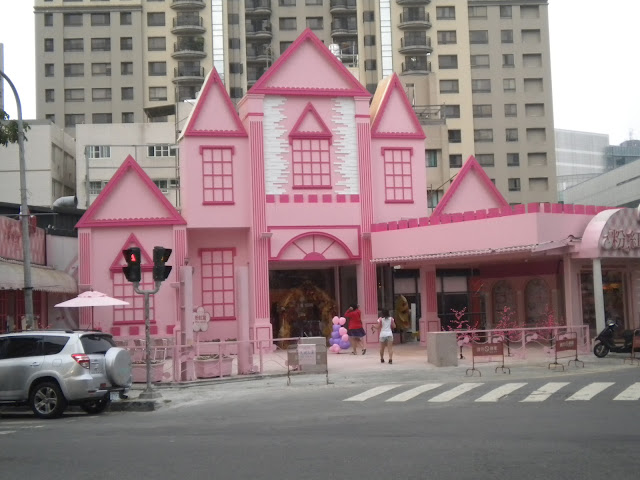 A Kaohsiung landmark - the Pink House. Located right behind the KHH Arena in Tsoying.

There's no gondola rides, National Museum or panda bears, but Kaohsiung is still a great city to visit if you know where to go.

My summer cycling hibernation officially ended today with a pleasant ride along the Love River and over to Cijin Island. The weather was nice and cool today, so hiked up to the Cihou lighthouse.

I really enjoy this spot in Kaohsiung - although the small group of Chinese tourists yelling at each other certainly detracted from the tranquility of today's visit. 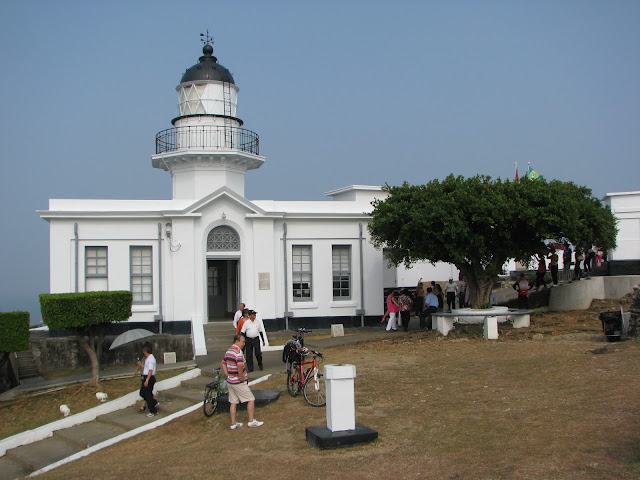 The down side of cooler winter temperatures in Kaohsiung is the accompanying drop in air quality.
I'm pretty sure the photos I took of the harbour today won't be featured in any tourism brochures. 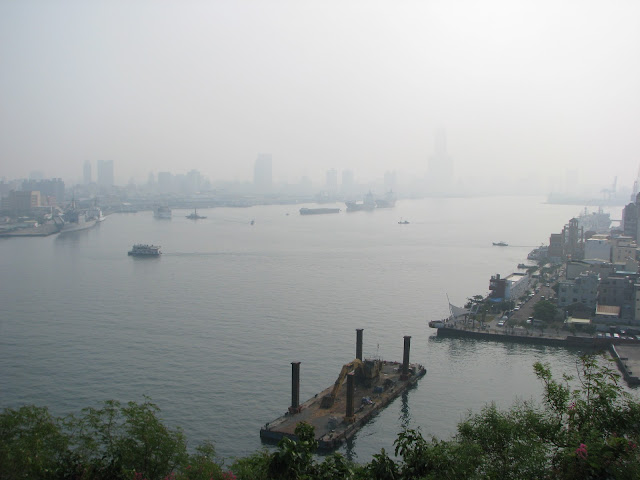 Slightly different from the same view at TravelTaiwanPage and at 360 degree cities. 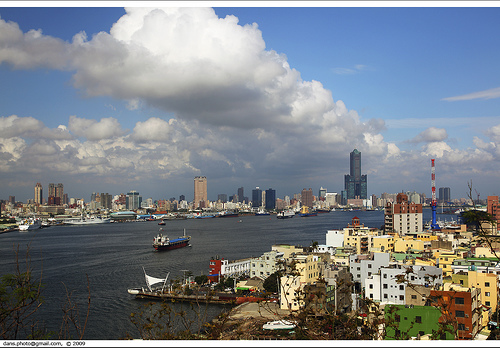 Despite how tempting this rope looked to climb up to the old lookout tower, I decided against it. 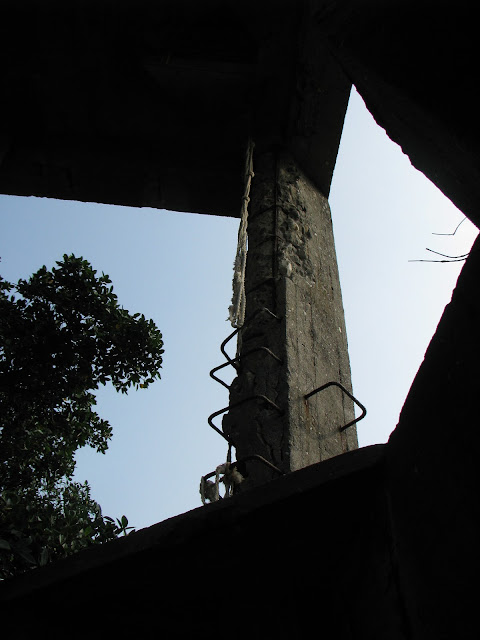 No hiking spot in Taiwan would be complete of course without a makeshift jungle gym. 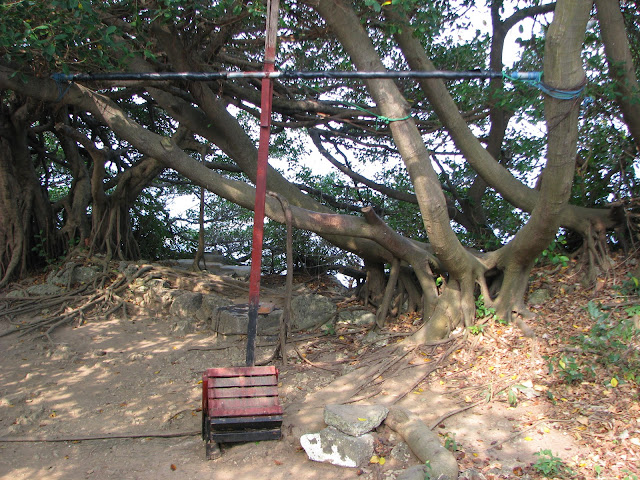