I've been having a large number of close calls / near accidents with bicycles over the past couple of months while riding my motorcycle. After riding accident-free on my motorcycle over the past 15 years in Taiwan, and always on the lookout for cyclists, it had me a bit puzzled. I hadn't changed how I was riding, so what was going on?

Well, there's just a heck of a lot more bikes on the road than ever before, and it's exposing a lot of the flaws in how the lanes and paths for bicycles in Kaohsiung have been designed. That, combined with the fact that bicycles aren't technically vehicles in Taiwan, and basically follow none of the rules for either vehicles or pedestrians; riding on the wrong side of the road, on pedestrian crossings and sidewalks are all common offenses. As a responsible cyclist, who always makes sure I'm riding in the right place and fashion 110% of the time, the behavior of other cyclists infuriates me at times.

The public bicycle rental system (C-bike) has been almost TOO successful and it's starting to cause problems. When I first saw them setting up C-bike rental stations around the city I was a bit sceptical about its chances for success, but it has certainly proved me wrong. The huge number of roads that now have sidewalk bike paths makes it seem like a safe way to get around a flat city. 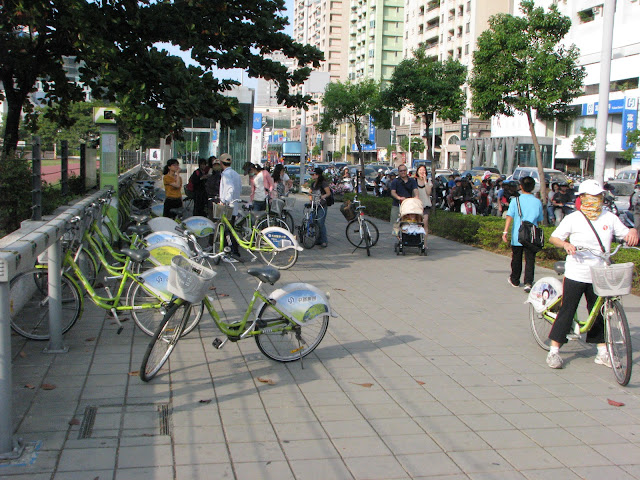 One of the many popular C-bike rental stalls near my house. 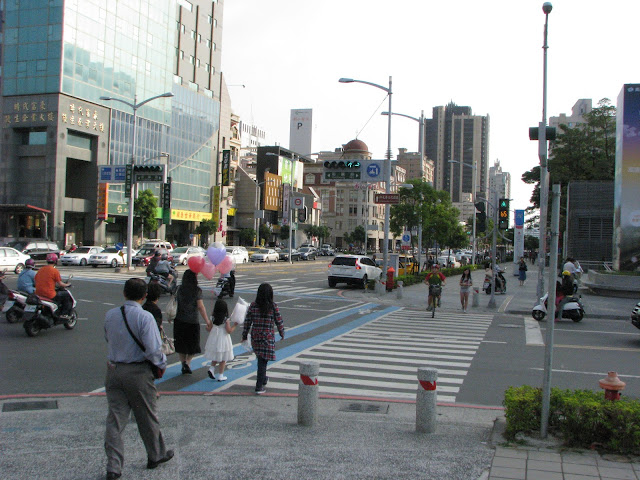 One of the main problems is people just don't walk or ride where they should. In the above photo you see the pedestrians using the bike lane and the cyclist across the street is forced to use the pedestrian crosswalk. As soon as the walkers get 2m away from the curb a scooter is going to make a right turn behind them and almost hit the cyclist because he is hidden from view behind the walkers, but going much faster than somebody on foot. The scooter rider never really had a chance to see it coming.

Do the walkers not see the blue lines on the road with a clear picure of a cyclist? Of course they do, but coudn't care less; even though their actions almost caused the serious injury of the boy on the bicycle. 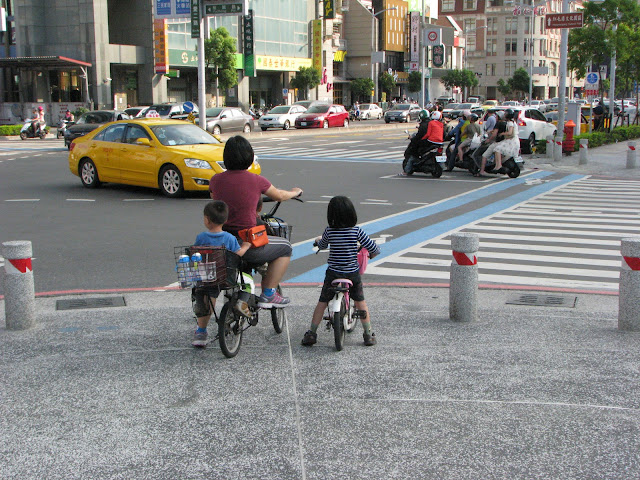 Seconds later, a family waits to cross the road on the bike path. 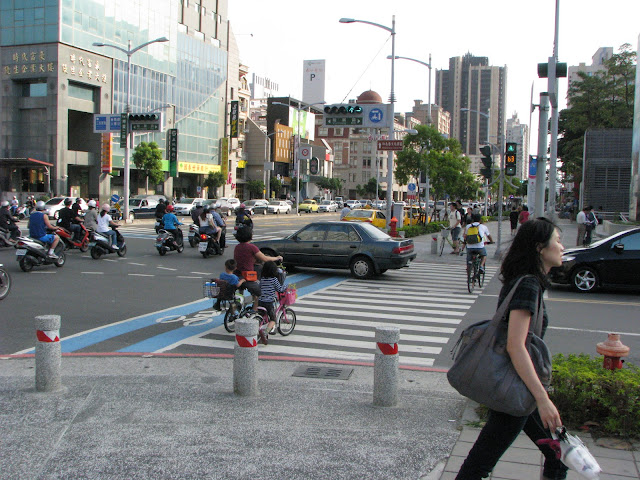 This time, a car has stopped blocking their path, so they too are forced to ride across the pedestrian crossing between the 2 cars. Just as they were going through the gap, they were almost hit by a motorcycle approaching from their right, on the far side of the black car.

The motorcycle was racing to make an illegal right turn on the red light and didn't expect anyone on the pedestrian crossing to make it into the space so quickly - in spite of the fact that the other cyclists, with the yellow backpack, just went in front of him!

It's when turning right on my motorcycle that I've been having the same problem. Bikes are entering the roadway at a place that is normally for pedestrians, and often mixed in with them, but at the speed of bikes. Just bad design. In every case, I almost hit a cyclist who seemingly came out of nowhere onto the road in front of me.

A lot of the problems are explained very clearly in this brilliant article:
How not to get hit by cars

Also enjoyed reading this piece the other day about the history of cycling lanes in the Netherlands:
How the Dutch got their Cycling Infrastucture

So, how did they succeed? They hit the streets and protested and didn't give up.
It took them a decade, before not only decision makers, but also the planners finally
listened to the protests. Getting the people who take decisions and those who have
to draw plans for the streets to adopt the new ideas: that is where the real change started.